Teacher Background
One of the greatest mysteries – how we inherit traits from our parents – was solved in the 1800s by the Austrian monk Gregor Mendel. Although he published his work in 1866, it went almost entirely unrecognized until the 1900s, long after his death.

Mendel worked with pea plants, carefully characterizing their traits and cross-breeding them over many generations. He observed that many traits occur in only two different forms (short or long stems, purple or white flowers, round or wrinkled seeds). When a short plant is crossed with a tall plant, the offspring are all either tall or short, not of middle stem length. This observation countered the “blending theory” that was generally accepted at the time. 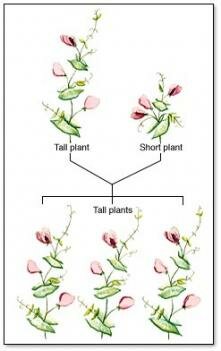 With these ratios and careful breeding experiments, Mendel discovered the basic laws of inheritance. He came to several conclusions:

These tall f1 plants with the genotype Tt are then crossed to one another. Since the offspring can be given a tall T allele or a short t allele, there are 4 possible combinations that may occur, each are equally likely: TT, Tt, tT or tt. Only tt would produce a short plant since in all the other cases, the dominant tall T allele is present to cover up any recessive short t alleles that might be present. Thus, there is a 3:1 ratio of tall to short plants in this f2 generation.

This can be graphically shown in what is known as a Punnett square which resembles a multiplication table as shown at left.

This inheritance pattern is simplest of all possibilities. It gets a whole lot more complex when you consider incomplete dominance (where the heterozygotes that have two different alleles like Tt have an intermediate phenotype), X linkage (what happens with genes on the sex chromosomes), polygenetic traits (traits determined by more than one gene), linked genes (genes that often go together because they are located close to one another on the same chromosome), and more.

In this activity, we examine some human facial traits that are assumed to be single gene traits. The actual genetics is MUCH more complex. However a brief run-down is provided here (for photos of the traits listed below, see attachment at the bottom of the Human Traits activity):

There are a few traits to be cautious about using with students because people have a difficult time accurately recording traits. For instance, nearsightedness is a single gene trait with normal vision dominant to nearsightedness. However, kids often aren’t diagnosed with nearsightedness until late in adolescence. This leads to awkward questions such as, “Both my parents are nearsighted but I’m not. Does that mean I’m adopted?” Often teachers use round versus square shaped faces in which round faces are dominant to square faces. Both me and my students have difficulty categorizing faces as round or square, leading to much confusion. Other traits that are often difficult to categorize include: lip shape, eye spacing, eyelash length, eye slant, nose shape, and eyebrow thickness. Finally, be sure to warn students that in categorizing freckles, DO NOT COUNT sun freckles. Freckles means a very large number of freckles all over the nose and cheeks, whether you’ve been in the sun or not.