DNA structure click on the image to see it rotateIn this activity, students “discover” the structure of DNA by playing with puzzle pieces representing the component pieces of the DNA ...

DNA structure: click on the image to see it rotateIn this activity, students “discover” the structure of DNA by playing with puzzle pieces representing the component pieces of the DNA molecule: the sugar deoxyribose, phosphate groups, and the 4 nucleic acids (adenine, thymine, cytosine and guanine). The process the students go through in putting the puzzle together resembles the way James Watson and Francis Crick deduced the molecular structure of DNA by manipulating molecular models of the component pieces (and a heavy reliance on the prior experimental work of Rosalind Franklin, Maurice Wilkins, and Erwin Chargaff). The model created by the students makes a lovely classroom decoration and reference for discussing DNA replication, transcription and translation.

Objectives
Can model and describe the general structure of DNA.
Can apply base pairing rules to assemble a DNA molecule.
Can infer that the sequence of the nucleic acids in DNA is the key to how DNA provides instructions to the cell.
Can relate this DNA puzzle activity to Watson and Crick’s original discovery of the structure of DNA. 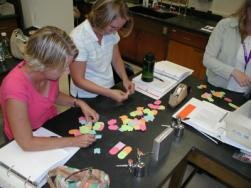 Grouping
Individual students gradually linking their puzzles together to create a long strand.

Teacher Background
Although DNA was isolated in the 1800s, it was not until the 1900s that scientists believed DNA might store genetic information. By 1929, the 3 major components – the sugar deoxyribose, a phosphate group, and a nucleic acid – had been identified. Furthermore, it was known that the phosphate groups linked the molecule together in a long polymer, however it was assumed that the chains were short and that the bases repeated in the same fixed order.

Towards the late 1940s, more and more came to be known. Erwin Chargaff noticed that in any species he studied, the quantity of adenine was always the same as the quantity of thymine while the amount of guanine was the same as the amount of cytosine. This came to be known as “Chargaff’s ratios”. But what did these rations mean? At around the same time, X-ray diffraction data indicated that DNA was coiled in a helical structure. But how many chains were part of the helix? Did the nucleic acids point in toward the center our face out?

Rosalind Franklin: Rosalind FranklinJames Watson and Francis Crick deduced the structure of DNA in 1953. There were several events that helped them put together the puzzle. First and foremost, the meticulous X-ray diffraction work of Rosalind Franklin and Maurice Wilkins clearly illustrated that the DNA molecule consisted of 2 strands, a double helix, with the nucleic acids on the inside of the molecule. Moreover, the distance between the strands and the pitch of the helix could be precisely measured. With this information, Watson and Crick were able to build a model of the sugar-phosphate backbone of DNA.

The final step of the solution required the use of cardboard models of the 4 nucleic acids. Watson and Crick cut out precise shapes for each nucleic acid. On the hunch that Chargaff’s rule implied a pairing between adenine-thymine and cytosine-guanine, they played with their puzzle pieces to see how they might fit together. They realized that in just the right orientation, adenine-thymine and cytosine-guanine pairs were almost identical in shape, thus providing equally spaced rungs between the 2 backbones of the ladder.

Watson and Crick DNA model: Physical model built by James Watson and Francis Crick to deduce the structure of DNA. Currently on display in the National Science Museum of London.
Watson and Crick published their work in 1953 alongside an article by Franklin and Wilkins showing the X-ray diffraction data. In 1962, Watson, Crick and Wilkins were awarded the Nobel Prize for discovering the structure of DNA. By that time, Franklin had died of ovarian cancer. Since Nobel prizes are not awarded posthumously, Franklin could not share in the honor.

Thus the structure of DNA can be said to be composed of two sugar-phosphate backbones, oriented in opposite directions to one another (notice how the sugars on one side are upside-down compared to the sugars on the other strand). The sugars are then attached to a nucleic acid. The nucleic acids are paired such that adenine is always matched to thymine with 2 hydrogen bonds while guanine is always matched to cytosine with 3 hydrogen bonds. A matching pair of nucleic acids is called a base pair. The assembly of one phosphate, sugar and nucleic acid is called a nucleotide.

Sources
This activity was adapted from a DNA model designed by Lori Lambertson of the Exploratorium Teacher Institute.

Standards
Grade 7
Cell Biology
1. All living organisms are composed of cells, from just one to many trillions, whose details usually are visible only through a microscope. As a basis for understanding this concept:
c.     Students know the nucleus is the repository for genetic information in plant and animal cells.

Genetics
2. A typical cell of any organism contains genetic instructions that specify its traits. Those traits may be modified by environmental influences. As a basis for understanding this concept:
e.    Students know DNA (deoxyribonucleic acid) is the genetic material of living organisms and is located in the chromosomes of each cell.

Grade 8
Chemistry of Living Systems (Life Sciences)
6. Principles of chemistry underlie the functioning of biological systems. As a basis for understanding this concept:
c.     Students know that living organisms have many different kinds of molecules, including small ones, such as water and salt, and very large ones, such as carbohydrates, fats, proteins, and DNA.

Grades 9-12
Genetics
5. The genetic composition of cells can be altered by incorporation of exogenous DNA into the cells. As a basis for understanding this concept:
a. Students know the general structures and functions of DNA, RNA, and protein.
b. Students know how to apply base-pairing rules to explain precise copying of DNA during semiconservative replication and transcription of information from DNA into mRNA.