DNA adding tapeIn this CSI activity, students solve a mystery using “DNA” taken from the scene of the crime. This write up describes how to collect a “DNA sample” (student ...

DNA adding tapeSummary
In this CSI activity, students solve a mystery using “DNA” taken from the scene of the crime. This write up describes how to collect a “DNA sample” (student invented DNA sequence on adding machine tape) from the culprit and from each person in the class, then run the DNA on a “gel” that covers the floor of the classroom, a hallway, or gymnasium. Naturally, the CSI aspect can become as elaborate as you wish by including additional “clues” such as fingerprints, a ransom note written in a specific type of ink, cloth fibers, eyewitness accounts and more. Since both DNA fingerprinting and paper chromatography (see Sources for lesson plans) rely on the same principles – separating molecules by size – a crime scene in which there is both a note written in a specific type of water-based ink as well as a DNA sample that may compared to the students’ DNA draws some interesting parallels conceptually between these two CSI techniques.

Objectives
Can explain what restriction enzymes do.
Can explain how gel electrophoresis works.
Can describe DNA fingerprinting methods.
Can discuss some of the considerations in evaluating DNA evidence in a crime.

Time
Day 1+: Investigating the crime scene (may take up to a week depending on the complexity of the evidence)
Day 2: Creating DNA samples and replicating DNA
Day 3: Running the “gel” and analyzing DNA fingerprint results

Setting
Classroom and possibly a hallway or gym to “run” your “gel”.

Teacher Background
The crux of this activity is the creation of a DNA sequence on a strip of adding tape, replication of the DNA, then using these DNA sequences to perform DNA fingerprinting. 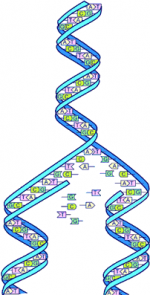 DNA replicationThe base pairing rules help explain the process of DNA replication – how a cell makes an exact copy each strand of DNA just before it divides. First, an enzyme called helicase unzips the DNA down the middle of the ladder, in between the base pairs. Next, an enzyme called DNA polymerase reads one half of the strand, identifies a matching nucleotide, and builds a new partner strand. The process is complicated by the fact that DNA polymerase can only work in one direction along the sugar-phosphate backbone (remember, that the 2 backbones are oriented in opposite directions to one another). Thus, while DNA polymerase can easily run continuously along one strand, known as the “leading” strand, the other “lagging strand” must be assembled in a piecemeal fashion, one section at a time.

DNA fingerprinting is a technique used to distinguish between individuals of the same species using only samples of their DNA. Its invention by Sir Alec Jeffreys at the University of Leicester was announced in 1985.

DNA fingerprinting is used in forensic science, to match suspects to samples of blood, hair, saliva or semen. It has also led to several exonerations of formerly convicted suspects. It is also used in such applications as studying populations of wild animals, paternity testing, identifying dead bodies, and establishing the province or composition of foods. It has also been used to generate hypotheses on the pattern of the human diaspora in prehistoric times.

If designed correctly, a restriction enzyme can target a part of the genome that his highly variable from person to person such that some individuals’ DNA will be cut while others won’t, resulting in variable length DNA pieces. These differences are known as restriction fragment length polymorphisms. This technique is also often used to determine an individual’s genotype for a given gene – for instance, to test for the presence or absence of a mutation that confers a certain genetic disorder.

These DNA pieces may then be separated using gel electrophoresis. This method places the DNA sample in a well on one end of a sheet of agarose gel, similar to a thin layer of jello. An electric field is then applied to the gel. Since DNA is negatively charged, it is attracted to the positive end of the field and begins moving through the gel. The larger, longer fragments cannot travel as far through the gel matrix and get trapped near where the sample is loaded. The smaller, shorter fragments can wiggle their way through the matrix more easily and thus travel further. This results in a unique pattern of bands for each individual, depending on the DNA sequence.

While the variable number of repeats displayed at any single STR region will be shared by around 5 – 20% of individuals, if you look at several STR regions simultaneously, this method becomes incredibly powerful. The more STR regions that are tested in an individual the more discriminating the test becomes. In the U.S.A., there are 13 loci (DNA locations) that are currently used for discrimination. This has resulted in the ability to generate match probabilities of 1 in a quintillion (1 with 18 zeros after it) or more. Therefore, it is possible to establish a match that is extremely unlikely to have arisen by coincidence, except in the case of identical twins, who will have identical genetic profiles.

The process begins by extracting DNA from the cells in a sample of blood, saliva, semen, or other appropriate fluid or tissue. Next, each STR region is amplified using polymerase chain reaction (PCR) so that the initially tiny DNA sample is copied many times, creating a sufficiently large pool of DNA for analysis. Finally, the DNA fragments are then separated and detected using gel electrophoresis. Again, the shorter the sequence of repeats, the further the DNA fragment will travel through the gel.

Student Prerequisites
A solid understanding of DNA structure and base pairing rules.

Lesson Plan
Day 1+ - Investigating the crime scene
If you set up a crime scene, make lots of observations of the crime scene. Start with all the kids outside the crime scene area, drawing pictures and writing down the things they notice. Finally, allow one student at a time enter the crime scene area wearing gloves to collect evidence. Evidence should be kept in plastic bags. Analyze any non-DNA evidence first. Dust for fingerprints. Collect hair and fiber samples. Perform paper chromatography on the ransom note and compare it against the pens in the possession of the various suspects. (See Sources section below for resources and lesson plans describing how to conduct these tests.)

Sources
If you are interested in creating a full-fledged CSI experience, an indispensable resource for teachers is the book, Mystery Festival, published by the Lawrence Hall of Science.

Other forensics science resources include:

Finally, for a great real world mystery to solve using DNA analysis among other techniques, go to the “Recovering the Romanovs” from DNA interactive by Cold Spring Harbor. It is quite simply, extraordinary.

Standards
Grade 7
Genetics
2. A typical cell of any organism contains genetic instructions that specify its traits. Those traits may be modified by environmental influences. As a basis for understanding this concept:
e.    Students know DNA (deoxyribonucleic acid) is the genetic material of living organisms and is located in the chromosomes of each cell.

5. The genetic composition of cells can be altered by incorporation of exogenous DNA into the cells. As a basis for understanding this concept:
a.    Students know the general structures and functions of DNA, RNA, and protein.
b.     Students know how to apply base-pairing rules to explain precise copying of DNA during semiconservative replication and transcription of information from DNA into mRNA.
d.    * Students know how basic DNA technology (restriction digestion by endonucleases, gel electrophoresis, ligation, and transformation) is used to construct recombinant DNA molecules.