The following are a series of real world genetics problems that relate to the genetic disorders cystic fibrosis and sickle cell anemia. They may be used to give students practice ...

Summary
The following are a series of real world genetics problems that relate to the genetic disorders cystic fibrosis and sickle cell anemia. They may be used to give students practice with Mendelian genetics and molecular biology or at the end of the unit to assess their understanding of various concepts. 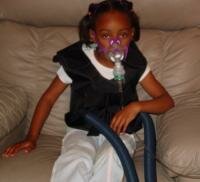 Cycstic fibrosis breathing apparatusCystic fibrosis is a genetic disease that affects many different parts of the body. There are approximately 30,000 Americans with cystic fibrosis. The most serious problem is the production of extremely thick, sticky mucus that clogs up the bronchial tubes in the lungs and the passageways in the pancreas (remember, the pancreas makes digestive juices that help break down food). This causes malnutrition, diabetes, lung infections, and difficulty getting enough oxygen to the body. Most people with cystic fibrosis die in their 20s or 30s from lung failure.

Cystic fibrosis is caused by a mutation in the cystic fibrosis gene. This gene provides the code for a protein that helps produce digestive juices and mucus. 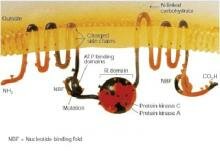 Sickle Cell Anemia
Sickle-shaped red blood cellsSickle cell disease is a disorder that affects the red blood cells. Red blood cells use a protein called hemoglobin to transport oxygen from the lungs to the rest of the body. Normally, red blood cells are round and flexible so they can travel freely through the narrow blood vessels.

Patients with sickle cell disease have a mutation in a gene that codes for part of the hemoglobin protein. As a result, hemoglobin does not form properly, causing red blood cells to be oddly shaped. These irregularly shaped cells get stuck in the blood vessels and are unable to transport oxygen properly, causing pain, frequent infections, and damage to the organs. Patients with sickle cell disease only survive to be 20 to 30 years old. About 1 in 500 babies born in America has the disease.

Use the genetic code below to decode the top strand of the DNA.

Sickle cell disease is most common in people of African, Indian or Middle Eastern descent. Africa, India and the Middle East all have a big problem with another disease - malaria. If you get malaria, you become extremely sick with a high fever, vomiting, convulsions and possible organ failure. Infants and children are particularly vulnerable. Almost 1 million children die from malaria each year.

Interestingly, people that only have one copy of the mutant hemoglobin gene are more resistant to malaria. If infected, they become only slightly sick (with symptoms more like the common cold) and children that are heterozygous rarely die from malaria!