Seismogram Image created by Crickett.Using the excellent Virtual Courseware - Earthquake program, students learn how to read a seismogram and use them to triangulate the epicenter of an earthquake. This ... 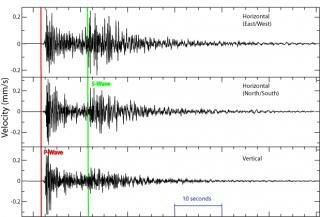 Seismogram: Image created by Crickett.Using the excellent Virtual Courseware - Earthquake program, students learn how to read a seismogram and use them to triangulate the epicenter of an earthquake. This program leads students step by step through the entire process of measuring the epicenter and calculating the magnitude of an earthquake. There is also an assessment tool associated with the program so that you can monitor how well your students did on the review quiz at the end of the activity.

Grouping
Individual or in pairs depending on the number of computers you have. 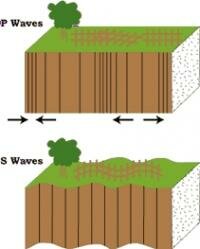 P and S waves: Image courtesy of USGS.An earthquake has struck somewhere in California! Can you figure out where? If you learn to read a seismogram you can!

First some earthquake basics… (The following background information is provided in greater detail on the student handout.) There are faults (cracks in the Earth’s surface) that can suddenly move as pressure from the movement of the Earth’s crust builds up. This sudden movement is an earthquake.

P waves (primary waves) are side-to side compression waves and travel quickly through the Earth. S waves (secondary waves) are up-and-down waves and are typically more destructive. In an earthquake, s waves travel more slowly than p waves. Thus, even though p and s waves start at the same time from the epicenter of a quake, the farther they travel, the greater the delay between the p and s waves.

Seismogram: Image created by Crickett.Earthquakes are recorded on instruments called seismographs which make recordings called seismograms. The x axis represents time while the y axis represents amplitude. The time axis can show the lag between when the p and s waves arrive and can thus be used to calculate the distance between the epicenter and the location of the seismograph. The amplitude axis reflects the strength of the shaking and can be used to calculate the magnitude of the earthquake.

Student Prerequisites
It is recommended that students are familiar with seismographs, seismograms, the difference between p and s waves, and reading latitude and longitude from a map before using the Virtual Courseware software. The student handout has a quick summary of this information, but 5 minutes to illustrate p and s waves with a slinky and to show students a seismogram before letting a sub take over would be helpful.

The program does provide a tutorial section that will show students a seismogram being generated and the propagation fronts of a p and s wave as they travel outward from an earthquake epicenter (the “SP Lag Time” tutorial). There is a second tutorial describing how to read latitude and longitude information (the “Latitude/Longitude” tutorial). If you don’t have time to preteach these concepts, then the tutorials can serve as a prelude to the 2 activities.

Sources
For information about earthquakes and seismology, see:

For an extensive list of earthquake teacher resources, check out the USGS Seismic  Waves page.

Standards
Grade 6
Plate Tectonics and Earth's Structure
1. Plate tectonics accounts for important features of Earth's surface and major geologic events. As a basis for understanding this concept:
d. Students know that earthquakes are sudden motions along breaks in the crust called faults and that volcanoes and fissures are locations where magma reaches the surface.
g. Students know how to determine the epicenter of an earthquake and know that the effects of an earthquake on any region vary, depending on the size of the earthquake, the distance of the region from the epicenter, the local geology, and the type of construction in the region.

Investigation and Experimentation
7. Scientific progress is made by asking meaningful questions and conducting careful investigations. As a basis for understanding this concept and addressing the content in the other three strands, students should develop their own questions and perform investigations. Students will:
c. Construct appropriate graphs from data and develop qualitative statements about the relationships between variables.