San Francisco, 1906 Aftermath of the 7.8 magnitude earthquake that caused an estimated 3,000 deaths and $524 million in damage.Students use the USGS World Earthquake Archive to research the major ... 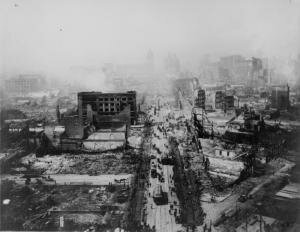 San Francisco, 1906: Aftermath of the 7.8 magnitude earthquake that caused an estimated 3,000 deaths and $524 million in damage.Students use the USGS World Earthquake Archive to research the major earthquakes in recorded history. Each student is given a range of dates and assembles a table of facts on 10 earthquakes within that time frame. Students present their research and plot the locations of their earthquakes on a large world map, thereby discovering distinct earthquake zones that define the boundaries of the earth’s plates (see the Plate Patterns activity for ways to elaborate on this idea).

Objectives
Can use the USGS Earthquake Archives to research information about historically important earthquakes around the world.
Can diagram and explain what causes earthquakes in general terms.
Can understand and use basic earthquake terminology (fault, epicenter, magnitude, etc.)
Can use latitude and longitude information to plot locations on a world map.

1. The Big One - Background 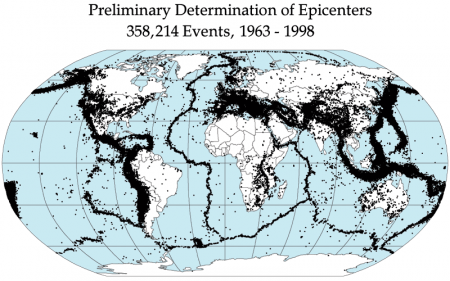 Earthquake epicenters 1963-1998: Image courtesy of NASA.
Teacher Background
An earthquake is the shaking that results from stored energy in the Earth that is suddenly released. When an earthquake occurs, seismic waves travel through the earth and can be measured by a seismograph (see the background section of the Earthquake Fingerprints activity for more information).

Most earthquakes (particularly the largest ones) occur at the boundary between 2 tectonic plates. Briefly, the Earth’s crust is composed of several large plates that are in slow but constant motion across the surface of the planet (see the background section of the Plate Patterns activity for more information). The boundary between two plates is the fault. There are many types of faults that push past one another in different ways – strike-slip (where the plates slide past each other like in the demo), normal and thrust (where one plate slides up relative to the other.

I demonstrate this concept with 2 Plexiglas sheets laid side by side on the table. I tape the junction with scotch tape. The 2 pieces of Plexiglas represent 2 of Earth’s tectonic plates; the gap between them represents the fault. The scotch tape represents the friction between the plates – all the soil and rock at the junction that prevents the plates from sliding past one another freely. Then slowly I push the plates past each other in opposite directions, one pushing away from me, one pulling towards me. A bunch of energy is stored and then suddenly, the tape fails and the plates jump apart in a sudden release of energy. Put a couple of Monopoly houses on each piece of Plexiglas and the point is driven home.

The activity that follows has students conducting research on historically significant earthquakes around the world using the USGS Earthquake Archive. Each student is assigned a time frame to research and picks 10 earthquakes in that time frame to record information about. There are around 36 time frames available. The following day, they share details about one of the earthquakes they researched and plot each of the 10 earthquakes on a large world map in the classroom.

An alternative way to achieve the same result is to track and plot the locations of earthquakes around the world day by day for several weeks/months until a pattern emerges. The USGS earthquake center provides a daily list of earthquake occurrences on their website with latitude, longitude, and magnitude information.

1. The Big One - Getting Ready

Lesson Plan
What is an earthquake demo:

1. The Big One - Assessment

1. The Big One - Sources and Standards

Sources
The idea came from Eric Muller’s activity Locating Earthquake Epicenters. His lesson suggests plotting daily earthquake data but I wasn’t able to spend a few minutes a day on that. Instead I modified Eric’s activity to fit in a single class period.

For resources and additional background information on plate tectonics, see the sources section of the Plate Patterns lesson.

Standards
Grade 6
Plate Tectonics and Earth's Structure
1. Plate tectonics accounts for important features of Earth's surface and major geologic events. As a basis for understanding this concept:
a. Students know evidence of plate tectonics is derived from the fit of the continents; the location of earthquakes, volcanoes, and midocean ridges; and the distribution of fossils, rock types, and ancient climatic zones.
d. Students know that earthquakes are sudden motions along breaks in the crust called faults and that volcanoes and fissures are locations where magma reaches the surface.
e. Students know major geologic events, such as earthquakes, volcanic eruptions, and mountain building, result from plate motions.

Investigation and Experimentation
7. Scientific progress is made by asking meaningful questions and conducting careful investigations. As a basis for understanding this concept and addressing the content in the other three strands, students should develop their own questions and perform investigations. Students will:
f. Read a topographic map and a geologic map for evidence provided on the maps and construct and interpret a simple scale map.

Grades 9-12 Earth Science
Dynamic Earth Processes
3. Plate tectonics operating over geologic time has changed the patterns of land, sea, and mountains on Earth's surface. As the basis for understanding this concept:
d. Students know why and how earthquakes occur and the scales used to measure their intensity and magnitude.