Teacher Background
As early as the 1920’s scientists recognized that earthquakes lined up along fault zones and were not randomly scattered across the globe. The technology improved dramatically in the 1960’s when standardized seismic monitoring stations were established around the globe to police the ban on above-ground nuclear testing. The location of active volcanoes also lines up along these same zones. For example, the Pacific Ocean is surrounded by volcanoes and earthquake zones – commonly known as the “Ring of Fire”. These zones mark the boundaries of the Pacific Plate. Other tectonic plate boundaries may also be identified in this way. 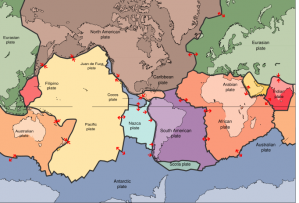 Only the Juan de Fuca, Scotia, and Arabian plates are easily overlooked. In fact, I generally don’t emphasize these 3 plates if my students don’t identify them themselves since it is not essential to me that they memorize all the world’s tectonic plates, only that they recognize how the crust is broken into moving plates and that they understand how the plate boundaries can be determined with earthquake, volcano and mid-ocean ridge information.

All these questions are related to the differences in what is happening at each of the plate boundaries. (I choose to hold off on discussing these issues with my students until after they learn about the interior of the Earth, convection cells, and sea floor spreading.) 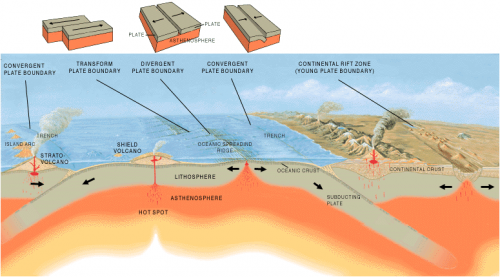 Types of plate boundaries: Image courtesy of the USGS.

For ways to model these different plate boundaries with students, see the Sea Floor Spreading activity.

Student Prerequisites
Students should have participated in labeling and discussing the large classroom map with earthquake epicenter data. Students should already know that earthquakes cluster in lines along faults and that these faults occur at the edges of pieces of land that are colliding or grinding past one another.