Summary
Students take what they know about earthquake, volcano and mid-ocean ridge distributions (The Big One and Plate Patterns) and put it together with what they know about convection in the Earth’s mantle (Journey Through Earth and Convection in a Pan). They revisit what they know about how earthquakes are created, by the sudden release of energy as plates collide or rub together (but not so much when they split apart). They look for patterns in their world maps, observing that mid-ocean ridges and dense earthquake/volcano zones tend to lie on the opposite side of plates. With this information, they can infer the direction that the plates are moving. Next students build a model illustrating seafloor spreading and discuss the magnetic and seafloor age data that support this model. Finally, students codify the different types of plate boundaries, describing the various features and characteristics of each.

Seafloor Spreading: Animation created by the US Geological Society.Objectives
Can find patterns on a map and use that information to infer the direction of plate motion.
Can diagram and explain what causes earthquakes and volcanoes.
Can build and interpret a physical model of seafloor spreading.
Can describe some of the evidence supporting seafloor spreading.
Can describe the characteristics of the 3 major classes of plate boundaries as well as differences between subducting convergent boundaries and continent-continent convergent boundaries.

Grouping
Inferring the direction of plate motion will occur in groups of 2 or 3. Making models of seafloor spreading takes place individually.

Teacher Background
Seafloor spreading is one of the most critical pieces of evidence in the development and support of the theory of plate tectonics. It is through this process that new oceanic crust is formed along the mid-ocean ridges as oceanic plates diverge and separate. Magma wells up into the gap, hardens, and forms new crust. As the plates continue to separate, these newly formed pieces of oceanic crust separate and make room, gradually moving outward away from the mid-ocean ridges at the rate of a few centimeters per year.

Using these patterns, students can infer both the direction and the relative speed each tectonic plate is moving. The following table shows all the plates and their approximate direction and speed.

The ultimate cause of sea floor spreading (and the theory of plate tectonics as a whole) is still debated in the scientific community. Some argue that it is driven by convection currents in the mantle. Others argue that the upwelling of magma and creation of new crust at mid-ocean ridges pushes the older crust out of the way (the “Ridge Push” theory). Others argue that the sinking of the old crust at subduction zones drags the oceanic crust along behind it (the “Slab Pull” theory). 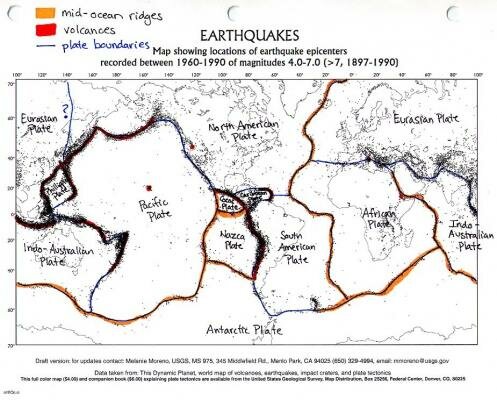 The best resources for more information on Seafloor spreading can be found at:

Standards
Grade 6
Plate Tectonics and Earth's Structure
1. Plate tectonics accounts for important features of Earth's surface and major geologic events. As a basis for understanding this concept:
a. Students know evidence of plate tectonics is derived from the fit of the continents; the location of earthquakes, volcanoes, and midocean ridges; and the distribution of fossils, rock types, and ancient climatic zones.
b. Students know Earth is composed of several layers: a cold, brittle lithosphere; a hot, convecting mantle; and a dense, metallic core.
c. Students know lithospheric plates the size of continents and oceans move at rates of centimeters per year in response to movements in the mantle.
d. Students know that earthquakes are sudden motions along breaks in the crust called faults and that volcanoes and fissures are locations where magma reaches the surface.
e. Students know major geologic events, such as earthquakes, volcanic eruptions, and mountain building, result from plate motions.
f. Students know how to explain major features of California geology (including mountains, faults, volcanoes) in terms of plate tectonics.