Teacher Background
Seafloor spreading is one of the most critical pieces of evidence in the development and support of the theory of plate tectonics. It is through this process that new oceanic crust is formed along the mid-ocean ridges as oceanic plates diverge and separate. Magma wells up into the gap, hardens, and forms new crust. As the plates continue to separate, these newly formed pieces of oceanic crust separate and make room, gradually moving outward away from the mid-ocean ridges at the rate of a few centimeters per year. 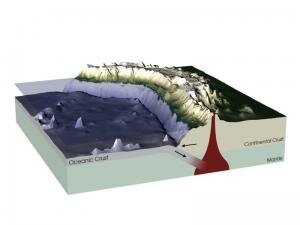 Using these patterns, students can infer both the direction and the relative speed each tectonic plate is moving. The following table shows all the plates and their approximate direction and speed.

The ultimate cause of sea floor spreading (and the theory of plate tectonics as a whole) is still debated in the scientific community. Some argue that it is driven by convection currents in the mantle. Others argue that the upwelling of magma and creation of new crust at mid-ocean ridges pushes the older crust out of the way (the “Ridge Push” theory). Others argue that the sinking of the old crust at subduction zones drags the oceanic crust along behind it (the “Slab Pull” theory).