Sources
This activity was inspired by the WGBH production of “Structures”, produced and narrated by Bebe Nixon. In this video designed to introduce teachers to inquiry-based teaching methods, students build towers and bridges out of drinking straws and see what is the maximum amount of weight each tower or bridge can hold. I adapted this lesson as a complement to the plate tectonics unit. 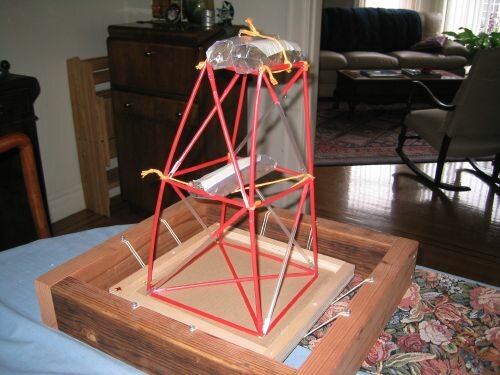 Other earthquake table designs powered by an electric drill are described by John Lahr.

A great, very accessible resource on structural engineering principles with projects that can be adapted for the classroom is the book The Art of Construction: Projects and Principles for Beginning Engineers and Architects by Mario Salvadori, Chicago Review Press (1981).

Standards
Grade 6 – Earth Science
Plate Tectonics and Earth's Structure
1. Plate tectonics accounts for important features of Earth's surface and major geologic events. As a basis for understanding this concept:
d. Students know that earthquakes are sudden motions along breaks in the crust called faults and that volcanoes and fissures are locations where magma reaches the surface.
e. Students know major geologic events, such as earthquakes, volcanic eruptions, and mountain building, result from plate motions.