Teacher Background
The Marin Headlands offers an exquisite opportunity for students to consolidate everything they have learned about geology and plate tectonics. Students (with a lot of guidance and help) find and piece together evidence concerning the geologic history of California. Students observe 3 different rock types and learn about how each one formed. Then, they take these observations back to the classroom to consider several possible explanations for how these rock types all ended up in the same place.

The first rock formation students observe are the pillow basalts at the Point Bonita Lighthouse. The best observation point is past the tunnel, on the left side of the 2-man suspension bridge, before you cross over to the lighthouse itself. If you look down, there is a picture perfect outcrop of pillow basalt right near the water. Another place to observe pillow basalts is on the cliffs on the right side of the trail, before reaching the tunnel. These pillows have been cut in half and may be seen exposed on the cliff as oval-shaped pockets of basalt.

This type of basalt forms when magma spills into cold ocean water. The outer layer of basalt rapidly hardens when it contacts the ice cold water, forming a round, pillow shaped shell. As more magma pushes from behind, part of the shell bursts and more magma rushes out. This pattern of magma release leads to a formation similar to pillow stacked one on top of another, or similar to the pattern made (in miniature) when Magic Shell® chocolate topping is dropped into ice water.

Two places one might expect to find pillow basalts forming is 1) at a volcanic island arc near a convergent plate boundary or 2) at a mid-ocean ridge where magma from the mantle pours out from between the gap between two diverging plates. While the pillow basalt found elsewhere in the Marin Headlands is consistent with a mid-ocean ridge origin, based on chemical analysis of the titanium and iron content, these pillow basalts at Point Bonita seem more consistent with a volcanic island origin. 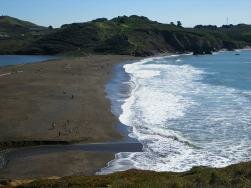 Rodeo Beach and sandstones: image courtesy of nickoneill (http://flickr.com/photos/nickoneill/)A short drive from the lighthouse takes you to Rodeo Beach. You can park at the north end of the beach by the restrooms.

The second rock formation students observe are the sandstone cliffs at the northern end of Rodeo Beach, near the parking area. These sandstone cliffs are typical of sandstones formed from the sedimentary remains of underwater landslides at the edge of a continent, generally near a subduction zone. One can tell that these sandstones were laid down in large, tumultuous landslides because they closely resemble a hugely magnified version of a soil separation test (see Soil Analysis lesson) – where sediments of various grain sizes are shaken in water and the large pebbles settle near the bottom and the smallest particles settle near the top. The sandstone formations similarly show a pattern of layered beds several meters thick. In each bed, large pebbles are found near the bottom and tiny clay particles may be found at the top, suggesting that the entire layer collapsed off the edge of the continent underwater, and sorted by particle size before being compacted and cemented together into a sandstone. 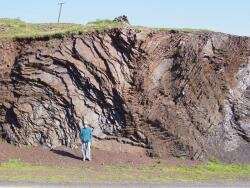 Ribbon Chert in the Marin Headlands: image courtesy of the US Geological SocietyTake the students south down the beach and hike around Rodeo Lagoon, a beautiful 1 mile walk. About 3/4 of the way around the lagoon, there is a tall, exposed chert cliff face on the opposite side of the road, with a nice open area at the base for students to gather and observe the rocks.

Chert is composed of several centimeter thick layers of radiolaria fossils. Radiolaria are tiny oceanic creatures whose shells drift down to the ocean floor when they die. Over many millions of years, their shells pile up on each other and form layers, which, as specified in the law of original horizontality, were originally laid down flat.

At the same time, magma rose up from beneath the descending plates, causing the formation of large volcanoes on the North American Plate, such as Mount Lassen and Mount Shasta. Some of the magma never broke through the crust as a volcano. Instead, the balloons of magma cooled gradually beneath the surface, formed huge granite mountains, and pushed up the Earth’s crust. These granite mountains form the bulk of the Sierra Nevada.

By 100 million years ago, these newly formed mountains had begun to erode heavily. Vast amounts of sediment washed down off the mountains and extended the edge of the continent further west, creating the Sacramento Valley. The bulldozer action of the North American Plate continued. The sandstone formations (like those on Rodeo Beach) provide evidence that the Marin Headlands is the edge of the continental plate. The pillow basalts (like those at the Point Bonita Lighthouse originally created near mid-ocean ridges and far away volcanic islands) and chert (like those near Rodeo Lagoon originally laid down in the ocean in nice flat layers) were unceremoniously scraped off the Farallon Plate. These pillow basalts and chert are the last remaining remnants of the Farallon Plate. By 28 million years ago, the Farallon Plate had been entirely consumed.