Ecosystem Pyramid student work The study of ecology has many layers, ranging from the individual organism, to the population, to the ecosystem, to the planet. It is important for students ... 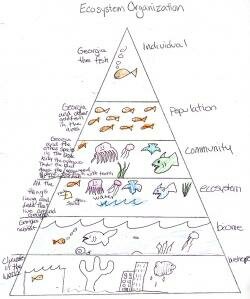 Ecosystem Pyramid student work The study of ecology has many layers, ranging from the individual organism, to the population, to the ecosystem, to the planet. It is important for students to know the levels within this hierarchy and to recognize which level they are focusing on at any one time. For the purposes of this activity, students will learn about the different levels (organism, population, community, ecosystem, biome, and biosphere) by choosing an organism and the illustrating a pyramid about that organism. The result is a colorful display of organizational pyramids.

Objectives
Can define and explain the relationships among: individual organisms, populations, communities, ecosystems, biomes, and the biosphere.
Can explain some of the reasons why different regions of the globe have different climates, and thus support different biomes.
Can describe the characteristics of familiar biomes: tundra, desert, prairie (grassland), deciduous forest, tropical rain forest, ocean.

Teacher Background
In order to study ecology, scientists need to see how organisms are related to one another and also to the environment in which they live. To do this, it is useful to think about a hierarchy of ecosystem organization ranging from the individual organism to the biosphere.

To begin with, consider a single organism, the individual. An “organism” is any living thing, whether it is a human being, a germ, a rose bush, or a panda bear.

A community is the next largest level of organization. A “community” includes all the organisms, sometimes hundreds of different types, in a given area. Several different populations are usually found in a community. The populations within a community are interdependent because of the food webs that bind them together. Communities can vary greatly in size. For instance, you could consider the community within a certain forest or you could think about a community in a garden. In MyScienceBox, students study microhabitats and look at a community within a single square meter. Communities can be even smaller such as the community that lives on and inside a single human being. On our skin are various molds, yeasts, and bacteria. In our hair we may have lice. In our intestines are E. coli and other bacteria. Many microscopic critters live in our mouth. Thus, there is a community of organisms living in and on your body!

Until now, we have only considered the living things in an area. The next level of the organization, an ecosystem, begins to include the nonliving parts as well. An “ecosystem” includes all organisms in a defined area and their nonliving environment. When you study an ecosystem, you look at how the nonliving and living parts affect one other. When you study a community, you only look at how the living things affect each other. Like a community, an ecosystem can be large or small. The Earth is the largest of all ecosystems which is called the “biosphere”.

The Earth ecosystem can be divided into several major biomes. A “biome” is one of several major types of ecosystems found on the planet. Each biome is characterized by a particular type of vegetation. Biomes generally encompass large geographical areas and are not sharply delineated (one will blend into another). You probably are already familiar with the major biomes already: desert, rainforest, grassland, tundra, coniferous forest, deciduous forest, and mountain. Some include the ocean as a non-terrestrial biome. One important point is that even though a biome like a rainforest will be similar anywhere in the world – all will have large trees, vines, many bird and animal species, etc. – the exact type of species of tree and the exact type of vine will vary from rainforest to rainforest. Thus in one kind of biome, different organisms will occupy the same niche. These organisms tend to be similar in form but often come from very different evolutionary backgrounds (for instance, consider the numbat, an Australian marsupial anteater, and other mammalian anteaters around the world including the giant anteater and the armadillo).

Student Prerequisites
Some understanding of food webs is useful but not required.

Assessment
Use a quick quiz the following day to test vocabulary retention. For example:

Sources
For more information about biomes around the world, see the Blue Planet Website

Standards
Grade 6
Ecology (Life Sciences)
5. Organisms in ecosystems exchange energy and nutrients among themselves and with the environment. As a basis for understanding this concept:
c. Students know populations of organisms can be categorized by the functions they serve in an ecosystem.
d. Students know different kinds of organisms may play similar ecological roles in similar biomes.
e. Students know the number and types of organisms an ecosystem can support depends on the resources available and on abiotic factors, such as quantities of light and water, a range of temperatures, and soil composition.