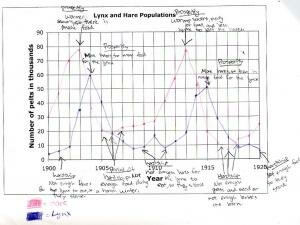 One student's hare & lynx population graphObjectives
Can define population.
Can graph changes in a population over time.
Can interpret graphs and identify causes of population change.
Can see how available resources determine the number and type of organisms that environment can support.

Populations are always changing. Sometimes changes are the result of humans interfering with food webs or habitats. But even when humans do not interfere, populations will still naturally shift up and down or fluctuate. As an example, we will look closely at the relationship between the Canada lynx and its primary prey, the snowshoe hare – an example touted in nearly every ecology textbook and population biology course.

The snowshoe hare is a common species of rabbit found in North America, its range extending throughout Canada, Alaska, and into the northern United States. One distinctive quality is its 2 different coloration patterns – brown in the summer, and white in the winter to better camouflage with the snow. Its diet consists of grasses, berries, twigs, bark and leaves.

The Canada lynx is a wild cat that resembles a large house cat with a short tail and prominent tufts on its ears. It is very secretive and even experienced hunters rarely see one in the wild. Its range overlaps with the snowshoe hare, on which it almost exclusively preys upon.

For over 300 years, the Hudson Bay Company has been involved in the fur trade in Canada. Detailed company records list the number of snowshoe hare pelts and the number of lynx pelts collected by hunters and trappers every year since the late 1700’s. The data shows a 200 year history of cyclical population booms and busts in the snowshoe hare population and a slightly delayed population boom and bust in the lynx population. Native Americans observed this cycle long before Europeans began trapping the hares and lynx for their pelts. Yet there are many competing theories to explain why the populations cycle in so dramatic a fashion. These theories include:

During peak years, the hares devour all the available vegetation and quite literally breed like rabbits until the environment can no longer support their blossoming population. As the hares become weakened by starvation, the lynx are better able to find and kill them, adding to their decline. The population does not reestablish itself immediately because it takes time for the vegetation to grow back.

Lastly, there is evidence that at the peak population levels, the hares become so stressed by the increasing numbers of predators that they no longer reproduce at the same rate. Their population falls both as a result of the lowered reproductive success and the sheer number of lynx that are out to eat them.

Although the subtleties of these theories may be too complex for the typical middle schooler, their understanding of food webs and intuitive understanding of predator-prey relationships will likely enable them to piece together the general picture well enough for it to make sense.

An intuitive understanding of predator-prey relationships.

Experience with graphing data on an x-y coordinate system. This is essential! For students only recently introduced to graphing, consider giving students the completed graph and carefully walk them through its interpretation.

9. Hare and Lynx - Getting Ready

9. Hare and Lynx - Sources and Standards

Sources
Of the many websites that explore the relationship between the hare and the lynx, by far the most dynamic and engaging is CBC Television’s production of Walking with Ghosts. The Overview section has detailed information about the hare, lynx, population cycles and even about predator biologists. Unfortunately, I was never able to figure out how to order a copy of the program. Please add a comment if you are able to get a copy!

Other resources about the hare-lynx population cycle include:

Standards
Grade 6
Ecology (Life Sciences)
Organisms in ecosystems exchange energy and nutrients among themselves and with the environment. As a basis for understanding this concept:
Students know energy entering ecosystems as sunlight is transferred by producers into chemical energy through photosynthesis and then from organism to organism through food webs.
Students know matter is transferred over time from one organism to others in the food web and between organisms and the physical environment.
e. Students know the number and types of organisms an ecosystem can support depends on the resources available and on abiotic factors, such as quantities of light and water, a range of temperatures, and soil composition.