Summary
Through a demonstration, students learn about the balance between subsidence and flooding in the formation of a wetland. Students then watch a short 15 minute PBS video about the wetlands of Louisiana. They will discover how levee building and the subsequent loss of wetlands contributed to the severity of Hurricane Katrina’s effect on the city of New Orleans. Finally, the class holds a discussion geared towards environmental stewardship and habitat restoration. 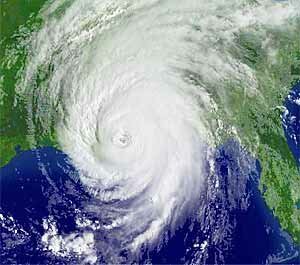 Can discuss the goals of habitat restoration.
Can recognize the importance of environmental stewardship.

Teacher Background
The recent hurricane in Louisiana is an ideal opportunity to connect what students are learning about wetlands to real world situations. Students with some background knowledge of what wetlands are and the important environmental roles they play can now apply these concepts to events in the Mississippi River delta.

In their natural state, wetlands are caught in the balance between subsidence and flooding. Subsidence in the most general sense is the sinking of soil relative to sea level. Subsidence is a natural part of wetlands due to soil compaction – air pockets in the soil collapse under the weight of the soil above.  In addition, some soil is eroded away by water and wind. Humans contribute to subsidence by extracting oil and natural gas (the soil above collapses when the oil below is removed). Although wetlands are sinking little by little, regular flooding brings in new sediment to rebuild the lost soil and maintain the soil levels in the wetlands. As the plant life in wetlands die, the decaying organic matter also contributes to the overall building of wetland soils. In its natural state, these two forces – soil loss through subsidence and soil building through flooding – are in balance, or in fact, wetlands grow over time as new sediment pours in from rivers and streams.

However, human developments strongly encourage the building of levees, dams, and canals to control flooding and improve water traffic. This prevents the soil building part of the equation, leaving an overall loss of soil year after year. The sediments in the canals shoot out to sea rather than rebuilding wetland soils. Wetlands shrink and eventually disappear. Land sinks. This is why much of New Orleans is below sea level. In fact, many other urbanized delta regions such as the Sacramento River Delta are experiencing the same subsidence problems.

Wetlands provide a natural sponge to soak up flood waters and act as a speed bump, slowing down hurricanes and blocking storm surges. Without much of the wetlands around Louisiana gone and with large areas of developed land below sea level due to subsidence, the effects of Hurricane Katrina were amplified upon the city of New Orleans.

So what can we do? First and foremost, we can educate ourselves and others about the science behind subsidence in order to understand the problem and not make the same mistakes in the future. Secondly, we can protect the few wetlands that remain as stewards of the environment. Finally, we can engage ourselves in rebuilding wetlands through habitat restoration efforts, many of which welcome teachers and their students to participate.

Student Prerequisites
Students should be familiar with what wetlands are and the important functions they serve in an environment. It is helpful if they have played with soil and looked at the components in soil (see Soil Analysis lesson) although it is not essential.

Getting Ready
For Subsidence Demonstration

Sources
The subsidence demonstration was adapted from the Loss of Wetlands: Subsidence activity from the USGS Fragile Fringe series.

The Audubon Society has a great page on wetlands loss and how to protect what remains.

For additional information, see the Sources and Standards section of the Watersheds and Wetlands activity.

Standards
Grade 6
2. Topography is reshaped by the weathering of rock and soil and by the transportation and deposition of sediment. As a basis for understanding this concept:
a. Students know water running downhill is the dominant process in shaping the landscape, including California’s landscape.
b. Students know rivers and streams are dynamic systems that erode, transport sediment, change course, and flood their banks in natural and recurring patterns.
d. Students know earthquakes, volcanic eruptions, landslides, and floods change human and wildlife habitats.