Summary
Students get an introduction to the San Francisco Bay watershed by studying a map of California. The concept of a watershed is solidified using the San Francisco Bay watershed as an example. Major geographical landmarks are identified on the map. Students then turn their hands into a portable map of the watershed. They discover how the water cycle determines the flows of water in different seasons, and therefore determines the utility of dams and reservoirs to even out the flow. In the process, students learn about the reasons the Bay is so important to California’s people, economy, and wildlife. This lesson may be extended into a history of the San Francisco Bay lesson.

Objectives
Can feel a sense of place and connectedness to other parts of the state.
Can identify the major landmarks in the San Francisco Bay watershed.
Can see similarities between very large watersheds (on a statewide level) and very small ones (on a neighborhood level). 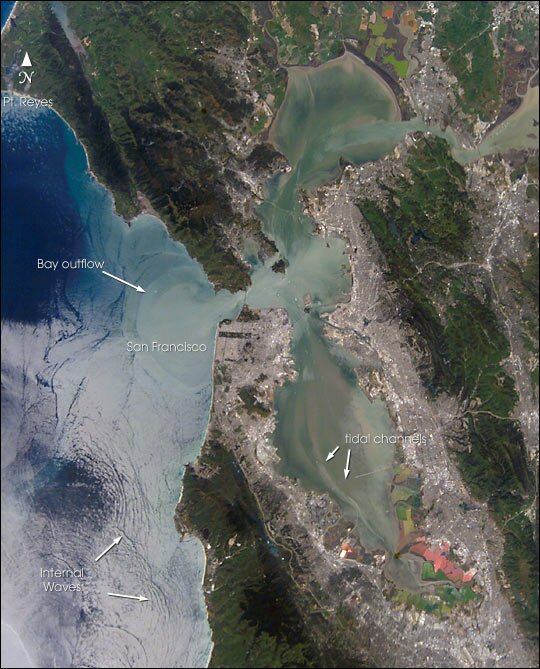 Teacher Background
The San Francisco Bay watershed covers 40% of the state of California. It provides drinking water for 2 out of 3 Californians and is the mainstay of the $18 billion dollar agricultural industry in this state. But it’s not just people who benefit. California is one of the biodiversity hotspots of the world, right alongside the Amazon River basin, Hawaii, and southeast Asia. There are large numbers of specialized habitats (like redwood forests) and endangered species who depend on the San Francisco Bay watershed for their survival. All Californians should know something about this critical aspect of their state.

Historically, the San Francisco Bay is relatively young. A million years ago (very recently in geologic time), a lake filled the Central Valley and drained out Monterey Bay. It was only 560,000 years ago that movement along the San Andreas Fault sealed off the passage through Monterey Bay and opened a new passage through San Francisco. Since then, due to the melting and refreezing of glaciers and ice sheets during the Ice Ages, at least 5 different San Francisco Bays have been known to exist. During an Ice Age, Earth’s water is primarily trapped in the mountains and polar regions as glaciers. The sea level drops up to 300 feet or more and beachfront property is miles offshore near the Farallon Islands. During inter-glacial periods, the glaciers melt, refill the oceans, and a Bay forms approximately where we find the Bay today.

My students had a very difficult time with the concept of the Ice Ages. Most held the mistaken belief that during the Ice Age, world temperatures plummeted suddenly (in a single lifetime or less) and the entire Bay was frozen as a gigantic skating rink. They believed the average temperatures on a typical October day to be around negative 20 degrees Fahrenheit. They knew there were animals but believed there were no plants that could possibly live in such cold temperatures. It took a lot of coaxing and evidence to convince them that this was not the case. In fact, the average temperatures during the Ice Ages were only 10-12 degrees less than they are now. While this does not sound like a big change, this is approximately equivalent to moving Canadian weather down to San Francisco.

The most recent cycle started 20,000 years ago during the middle of the last Ice Age. Ice Age animals such as bison, camels, ground sloth, mastodon, and saber tooth cats roamed the area surrounded by an assortment of Mediterranean plants. Around 10,000 years ago, the large animals began dying off, the Ice Age receded, and a small spike of ocean water entered what is now San Francisco Bay. 5,000 years ago, early Native Americans settled in the Bay Area. The Bay continued to grow by several inches per year. By 2,000 years ago, the Bay had filled to near its current size.

The Gold Rush has an enormous impact on the Bay. Hydraulic mining, a mining technique in which high pressure water hoses washed away entire hillsides to reveal the gold within, washed 12 billion tons of sediment down the rivers and into the Bay. Riverbeds became shallow and caused massive flooding in the Central Valley. The Bay itself became far more shallow and is now an average of only 14 feet deep. Transportation channels must be continually dredged to permit large boats to pass. Moreover, miners used the deadly toxin mercury to help extract gold. 12 million pounds of mercury washed downstream to mix with the sediments of the Bay. 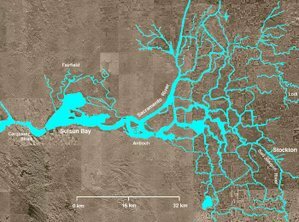 California’s Sacramento River Delta is unusual in that it is an inverted river delta where two rivers converge and are forced through a single pass rather than a traditional river delta where a single diverges into many rivulets on its final journey to the ocean.

The soil is exceedingly rich in nutrients, which has made the delta region a rich agricultural area. However, levees built around the many delta islands have contributed towards extensive subsidence. Today, much of the delta lies below the waterline and is in danger of flooding if any of the levees should break. 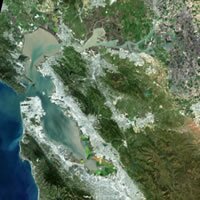 The San Francisco Bay is not technically a bay. It is an estuary – a partially enclosed body of water where salt water and fresh water mix. While fresh water enters from the Delta, from rain, wastewater treatment plants, and groundwater, salt water rushes in with each tide through the Golden Gate.

The Bay itself has 4 lobes. The Delta feeds into Suisun Bay which then extends into San Pablo Bay. The Central Bay then opens out to the Pacific Ocean through the Golden Gate. The South Bay drains the areas surrounding San Jose and also exits via the Central Bay to the Pacific. In a satellite image, the Bay looks like a mermaid in profile. San Pablo Bay forms her head with Suisun Bay and the California Delta as her hair stretching towards the mountains. The Central Bay forms her body with her arms in prayer (“Please help save me!”) or others claim her arms reach out through the Golden Gate to the sea. The South Bay forms her tail.

This lesson is an excellent prelude to
field trip to the San Francisco Bay Model in Sausalito or before a trip with the Marine Science Institute on their fabulous research vessel, the SS Bownlee, where students can catch and observe the Bay’s creatures up close.

Student Prerequisites
Students should know what a watershed is (see
Watersheds and Wetlands activity) and be familiar with the water cycle (see Water Cycle Stories activity).

Sources
Ideas
The idea for this activity came from the “Watershed in your Hands” Lesson from Save the Bay’s watershed curriculum (downloadable below). I have also seen Mike Moran, a naturalist at Black Diamond Mines, present this lesson at a teacher workshop in much the same way as I have described here – although his presentation is far better in my estimation.

Maps
Hubbard Scientific makes exceptional relief maps for most states. The California relief map is around $25-$30 and is absolutely worth the cost. Students love the tactile quality of running their fingers across the mountains and much more readily grasp the idea of topographic maps in later lessons.

The USGS Store has the best deal on maps. For around $7-10 you get gorgeous relief maps and satellite images. The California State relief map is product #43555. The San Francisco Bay satellite image is #47251. You can find a map for virtually any US geographical area.

Blank line drawing California maps for students to color and label may be printed from Net State.

There are excellent free digital satellite images that may be downloaded and printed on the USGS website.

Save the Bay’s Bay Classroom has a wonderful, kid-friendly Bay history section.

A gorgeous book was recently put together by the Bay Institute and the Audubon Society called San Francisco Bay: Portrait of an Estuary.

The San Francisco Estuary Project has a number of excellent fact sheets that may be downloaded and printed out.

And if these aren’t enough, go to the California Academy of Science San Francisco Bay resources list. They provide a huge list of books, videos, scientific papers, curriculum guides, and more all related to the San Francisco Bay.

Teacher Training Opportunities
I attended Save the Bay’s “Gold Rush to the Golden Gate” summer teacher training which was an extraordinary experience. We camped and canoed all along the watershed, experiencing the watershed first hand and drawing connections between the various parts of the watershed through speakers, activities, and discussions. GO! It’s amazing!

The Watershed Project offers wonderful training opportunities for teachers about the San Francisco Bay and its watershed.

Shaping Earth’s Surface
Topography is reshaped by the weathering of rock and soil and by the transportation and deposition of sediment. As a basis for understanding this concept:
a. Students know water running downhill is the dominant process in shaping the landscape, including California’s landscape.
b. Students know rivers and streams are dynamic systems that erode, transport sediment, change course, and flood their banks in natural and recurring patterns.
d. Students know earthquakes, volcanic eruptions, landslides, and floods change human and wildlife habitats.