Summary
What’s the big deal about rocks? They don’t move, aren’t flashy, and seem pretty useless to the untrained eye. However, geologists are rock detectives, discovering clues to the ancient past. If you know how to read them, rocks can tell an observant scientist about what a place looked like millions and even billions of years ago. This activity introduces the 3 main types of rocks and the processes that form them. Wax crayons are eroded into sediment, compacted into sedimentary rock, partially melted and pressed into metamorphic rock, and finally melted and cooled into igneous rock. This understanding is the basis of the rock cycle. In the Going Further section, there is a recipe for making your own sandstone, siltstone and conglomerate using sediments and a sodium silicate solution. 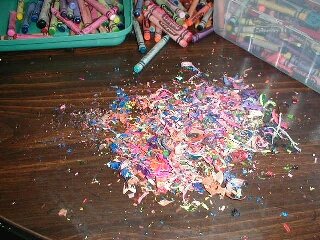 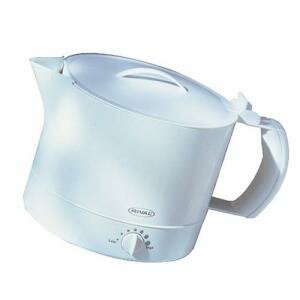 For the whole class:

Teacher Background
The rock cycle is perhaps the most basic, fundamental principle of geology. All rocks are related to each other and may be transformed from one kind to another. In its simplest form, the rock cycle describes the relationships between the 3 major types of rock:

Molten rock or magma solidifies either rapidly at the Earth’s surface or slowly under the Earth’s surface into igneous rock (this is the whole crayon we start with). As these rocks are exposed to erosion and weathering, they are broken down into sediment (a pile of crayon shavings). The grains of sediment may be transported long distances by water, wind or gravity, and eventually deposited in layers. As more and more sediment layers build up on top of each other, the sediments are compacted and sometimes cemented together into sedimentary rock (squishing the crayon shavings together) in a process called lithifaction. With heat and pressure (partial melting in hot water), the rock will undergo a physical and/or chemical change into metamorphic rock. If the rock is melted completely and cooled, you once again have igneous rock.

The rock cycle is attributed to James Hutton (1726-1797), the “father of geology” who meticulously explored and documented the landscape of the British Isles. Hutton proposed the principle of uniformitarianism, the idea that the processes that shape the world today also operated in the past. His idea brought about the revolutionary notion that given how long it takes for geologic processes to occur today, the Earth must be very very old for all the existing landforms to have been created, not merely the 6000 years allowed by tracing Biblical genealogy. One of his most famous quotes states that with respect to the Earth there is “no vestige of a beginning, and no prospect of an end”.

Portrait of James Hutton, 1726-1797, by Sir Henry Raeburn. From the collecctions of the National Galleries of Scotland.

With greater scientific sophistication and the plate tectonics revolution, many geologists now believe that the basic rock cycle described in this lesson is too simple. The basic rock cycle is cyclical, with no apparent direction or trend. Instead, if plate tectonics is taken into account, there may indeed be a trend towards greater and greater diversity of rock types over time. For more information, see the Tectonic Rock Cycle

Sources
The best write up for the crayon rock cycle activity is available from Eric Muller of the Exploratorium’s Teacher Institute. Go to The Crayon Rock Cycle. Eric has developed many other fantastic activities, particularly for Earth Science.

For additional information about the rock cycle, go to:

Sodium silicate solution (also called water glass) can be purchased from most science supply companies such as Flinn Scientific and Science Kit & Boreal Labs. A 500 ml bottle costs $5-6. Sometimes it can be found at marine supply stores in quart sized containers for sealing the outside of boats.