Summary
Every rock holds clues about how it formed. Geologists are like rock detectives who know how to read the clues about a rock’s origins and the stories it can tell. In this activity, students first become specialists in one type of rock. Then, they meet specialists in other rock types to compare their rocks and teach the others about their rock’s history. This lesson is an opportunity for students to consolidate information from the previous lesson on the rock cycle, and begin to think like geologists. Ideally, the rocks selected for investigation are collected from the site of an upcoming geology field trip – such as to the Caldecott Tunnel or Mount Diablo. In this way, students gain experience identifying individual rocks and learning about the way in which each of the different rock types form. Then, on the field trip, students can apply their controlled classroom knowledge to real world geological history. 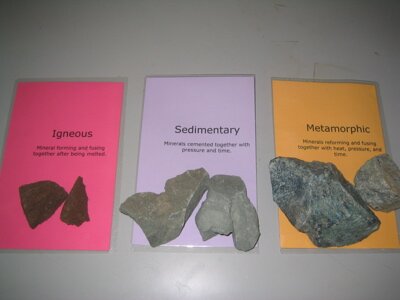 Objectives
Can describe the 3 major types of rock (sedimentary, metamorphic, and igneous) and discuss the relationships between them
Can make careful observations of rocks, including conducting tests for hardness
Can use observations to identify an unknown rock as sedimentary, metamorphic, and igneous
Can describe the geologic processes that formed each of the 3 major types of rock

Grouping
Students will begin in teams organized by rock type. They will become specialists on that one type of rock. They will then rearrange into teams with one representative of each rock type and will compare their rocks and tell each other the histories of the rock they studied.

Teacher Background
In my classes, I used this lesson to prepare students for the Caldecott Tunnel field trip. Therefore, the rocks described in the teacher background section relate to those found in the cliffs of the Berkeley and Oakland hills. Additional sources for identifying common rocks that might be found in your backyard are provided in the Sources section. What follows is a brief introduction to sandstone, mudstone, conglomerate, basalt and granite.

**A special note on hardness testing**
Hardness testing is an easy test to determine the relative abrasion resistance of different minerals and rocks. Using an index material, like a fingernail with a hardness of 2.5, if your fingernail can scratch the surface of the rock you are testing, the rock has a hardness of less than 2.5. However, if the rock can scratch the surface of your fingernail, then the rock has a hardness of more than 2.5. By using a variety of common objects for comparison (fingernail – 2.5, penny – 3.5, butter knife or glass – 5.5, steel file – 6.5) you can easily approximate the hardness of your mystery rock. Unfortunately for this lesson, hardness tests are most useful for minerals that are composed of a pure substance of uniform density. In contrast, the hardness of a rock that is composed of a mixture of minerals will vary depending on the type of minerals in the rock and also how tightly bound the particles are to one another. For instance, a sandstone may be composed mainly of quartz grains with a hardness of 7 that can scratch steel, yet the rock itself might crumble in your hand. Thus, while hardness testing is a standard skill for geologists that want to know the mineral content of a rock, don’t rely on the measurements to identify the rock itself.

Sandstone
Sandstone is probably the most well known of the sedimentary rocks. It varies in color from red to brown, grey to white, sometimes with a tinge of green or yellow. It is usually composed of rounded sand particles that are medium grained, approximately the texture of beach sand. Sand is produced from the weathering of other rocks (like granite, sandstone and basalt). The sediment in a sandstone may have come from a sandbar along a river, an ocean beach, or desert sand dunes. As more and more sand layers accumulate on top on one another, the weight of the topmost layers compacts the sediment into rock. Often, minerals dissolved in water seeps down into the sandstone, cementing the rock together. The hardness varies greatly, between 2-7, depending on how tightly the sediment was compacted and cemented together.

Conglomerate
Conglomerate is a sedimentary rock similar to sandstone except that it contains chunks of rounded rocks and gravel. These are formed in fast-moving rivers where the water washes away all but the largest rocks. The hardness varies greatly, between 2-7, depending on how tightly the sediment was compacted and cemented together.

Basalt
Basalt is the most common type of rock on the Earth’s surface. Most of the ocean floor is composed of basalt. It is an igneous rock, formed from magma that cools at the Earth’s surface as it erupts from a volcano. It is generally dark in color, from black to dark grey although the rocks near Caldecott Tunnel are weathered to a dark red-brown. It has a hardness of 5-6 and is so fine grained that you need a microscope to be able to see the crystallization pattern. If it cools quickly, it forms a glassy, obsidian surface. Often, air pockets develop within the basalt as it cools, creating a distinctive holey texture like a sea sponge.

Granite
Granite is rapidly becoming the favorite surfacing material in kitchens. It comes in nearly every color of the rainbow, from pink to green to brown to black to white depending on the minerals and inclusions in the rock. The most distinctive feature of granite is crystals of varying color and size, randomly distributed throughout the rock. Granite is very hard, between 6-8 on the Moh’s hardness scale. It forms deep under the Earth’s crust as balloons of magma become trapped under the crust and slowly cools over thousands of years. Thus, granite often forms near subduction zones, where old crust is melted and rises up under the continental shelf. Most of the Sierra Nevadas is made of granite.

2. History of Rock - Getting Ready

Match each statement to the type of rock being described:
a) sedimentary
b) igneous
c) metamorphic

2. History of Rock - Sources and Standards

Sources
Many rock identification guides are available on the Internet. My favorites include:


For more information about mineral testing, including using the Mohs scale of hardness, see:

Investigation and Experimentation
Scientific progress is made by asking meaningful questions and conducting careful investigations. As a basis for understanding this concept and addressing the content in the other three strands, students should develop their own questions and perform investigations. Students will:
a     Develop a hypothesis.
b     Select and use appropriate tools and technology (including calculators, computers, balances, spring scales, microscopes, and binoculars) to perform tests, collect data, and display data.