Summary
To apply students’ understanding of the rock cycle and basic principles of stratigraphy, I brought my students to the Caldecott Tunnel to investigate the local geology and piece together the geologic history of their backyard. The east side of the tunnel has an easily accessed road cut that displays a gorgeous example of a contact between older sedimentary rock layers and a more recent volcanic layer. The whole thing has been folded and faulted by the actions of the Hayward Fault, and thus the layers are no longer horizontal but at a sharp diagonal. My students drew pictures of the northern cliff face on the Orinda side of the tunnel then each student was assigned a rock layer to study in detail. When we got back to the classroom, we reassembled the data on the whiteboard, and made theories about the sequence of events that would bring about the rock layers we observed in the cliff. Finally, students drew pictures of what the area must have looked like at different parts of the timeline. This field trip led gracefully into the next segment of the unit on geologic time. 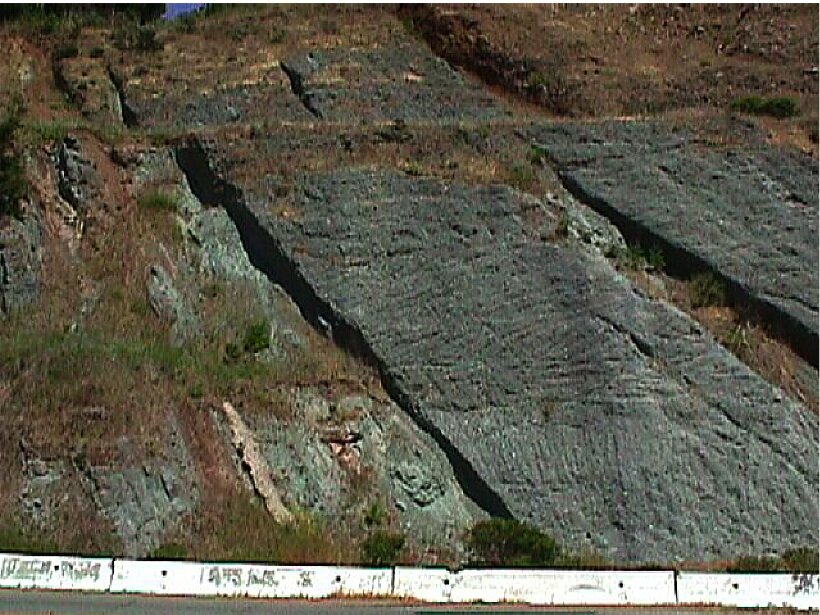 Photograph of the northern roadcut face at the Caldecott Tunnel from the field trip “Caldecott Tunnel between Oakland and Orinda” by Russell W. Graymer in "The Geology and Natural History of the San Francisco Bay Area: A Field-Trip Guidebook", edited by Philip W. Stoffer and Leslie C. Gordon.

Objectives
Can describe the environments in which different sedimentary rocks are formed
Can apply Steno’s 3 laws of stratigraphy to rock layers in the real world
Can apply the laws of stratigraphy to describe the relative age of rock layers, even when the layers have been disturbed
Can use field data to recreate the geologic history of the Berkeley hills
Can make hypotheses about the probable cause of transitions between 1 rock layer and another

Grouping
Individual or in pairs.

Teacher Background
The road cut on the east side of the Caldecott Tunnel provides a fantastic example of stratigraphy that students can use to assemble the geologic history of the East Bay Area using their own observations and basic knowledge of geology. Logistically, there is decent parking for a busload of students in the loop of the onramp heading west on Highway 24 from Fish Ranch Road. There is a wide barrier between the freeway and the area to conduct your geologic explorations so you and your students are reasonable safe from the rushing traffic.

As to the geology, the first thing you will notice are clear rock layers at a steep diagonal to the horizontal. Clearly, something happened to turn the originally flat layers, according to the law of original horizontality, on their sides (more on the tilting of the rock layers in a moment). The second thing you will notice are two distinct rock types. As you look at the north face of the road cut, to the upper right are indistinct layers of dark brown rocks while to the lower left are much more clearly delineated grey-green rock layers of an entirely different origin.

Upon closer examination, the dark brown rocks are a volcanic basalt, part of what geologists call the Moraga Volcanics. Their hardness and uniform, microscopic crystallization pattern give these rocks away as igneous rocks. A high iron and magnesium content gives them the distinctive red-brown coloration, as opposed to the more traditional black basalt of other volcanic areas. Among the eroded rock pieces along the base of these volcanics you might also find holey basalt that looks like sea sponge, evidence that some of the basalt contained many gas bubbles that were trapped in the magma as it cooled. There are also great veins of pagioclase crystals that formed as the magma cooled slowly, deep below the surface. The plagioclase was carried to the surface by lava during major eruptions.

The basalt layers are clear evidence that this area was once peppered with active volcanoes. As you look across the highway to the south side of the road cut, the thickness of these lava layers is evident, indicating extensive volcanic eruptions that covered the region in thick lava flows for many thousands of years. Radiometric dating has determined that these Moraga Volcanics are about 10 million years old.

On the other hand, the grey-green rocks are clearly not volcanic. They form easily identifiable layers, alternating between chunky conglomerates, crumbly mudstone, and rough sandstone, collectively known as the Orinda Formation to geologists. These are clearly sedimentary rocks, formed from sediments deposited and then compacted into rock. The conglomerates contain a wide variety of rocks trapped within a matrix of sand and mud. These trapped rocks are rounded and worn, just like river rocks because they are the remnants of an ancient river that once flowed through the area. The sandstones and mudstones are evidence that this river changed over time, changing course so this spot became part of the surrounding flood plain or becoming part of the river delta as sea levels rose and fell. Although these rocks cannot be radiometrically dated, it is clear that the Orinda Formation is relatively older than the 10 million year old Moraga Volcanics that lie on top of them, the law of superposition.

The junction between the Orinda Formation and the Moraga Volcanics is called a contact – a place where 2 distinct geologic formations meet. A close look at the junction between the two layers shows a red layer of mudstone. Unlike the grey-green mudstone elsewhere in the Orinda Formation, the red color is evidence of the mudstone being baked by the red hot lava that flowed across its surface, just as grey clay turns red after it has been fired in a kiln.

To summarize so far, the East Bay was at one time a great river valley with a river coursing through it, changing course and its identity as the ocean levels rose and fell and as sediments from hills being eroded upstream were deposited. Then, 10 million years ago, there was a burst of volcanic activity, flooding the river valley, not with water and transported sediments, but with magma.

So how did these layers get tilted? Sometime after the period of volcanoes marked by the Moraga Formation, the Hayward fault came into existence, causing the Berkeley hills to be pushed upward and the rock layers here to become folded and tilted out of their original, flat orientation. The conglomerates that once lay in a river valley and were then covered in layers of lavarock, were pushed skyward by tectonic forces, lifting them into the cliffs that tower above the roadside today. In the 1930’s construction began on the Caldecott Tunnel proper. As the hillside was cut open and the tunnels bored through the mountains, these beautiful rock layers were revealed. 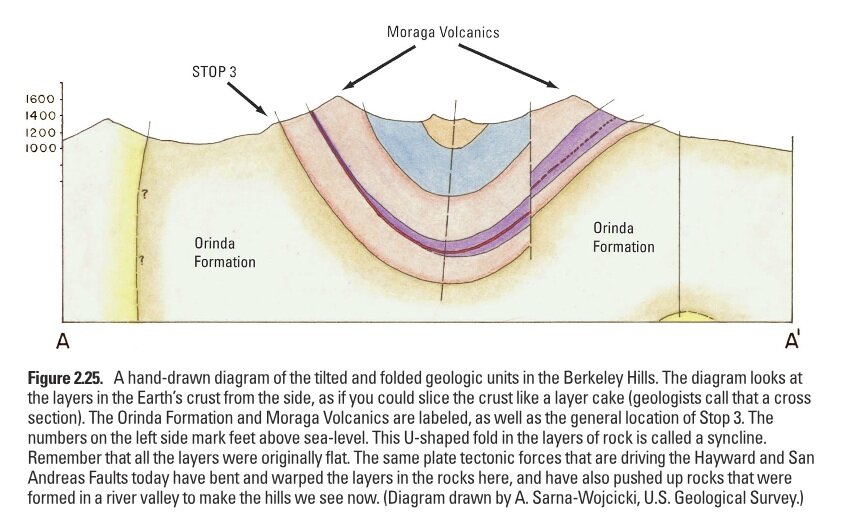 Student Prerequisites
Essential to this field trip are: a solid understanding of the rock cycle (see Crayon Rock Cycle lesson), previous experience identifying the individual rocks that will be encountered in the field and deducing the history of their formation (see History of Rock lesson), and a good grasp of the major principles of stratigraphy (see Layers Upon Layers lesson).

Organizing the Data and Drawing Conclusions

Sources
The best overview of the geology of the Caldecott Tunnel region is available in the book: The Geology and Natural History of the San Francisco Bay Area: A Field-Trip Guidebook, edited by Philip W. Stoffer and Leslie C. Gordon, published by USGS. The information you want is found in the second field trip, “A Geologic Excursion to the East San Francisco Bay Area”, stop #3, “Caldecott Tunnel between Oakland and Orinda”. The entire guide with other excellent field trips throughout the Bay Area may be downloaded from the USGS website.

Professor Steven Dutch of the University of Wisconsin, Green Bay has put together an excellent series of photos of the road cut near the Tunnel.

To learn more about the Caldecott Tunnel itself, the California Department of Transportation has a website with a historical timeline of the tunnel and information about current projects. In addition, engineers J. David Rogers and Ralph Peck describe the geologic engineering for the BART system (Bay Area Rapid Transit).

For an even broader discussion of the geology in the Bay Area, the USGS has assembled a treasure trove of information about the geology of the San Francisco Bay Area.

Finally, to pan back even further to view the geology of the entire state of California, legendary science writer John McPhee’s book Assembling California provides an in depth, highly accessible discussion of the geologic history of California. READ IT! And read McPhee’s other works such as Basin and Range. I personally disliked geology as a science until I read McPhee and suddenly fell in love with the field.